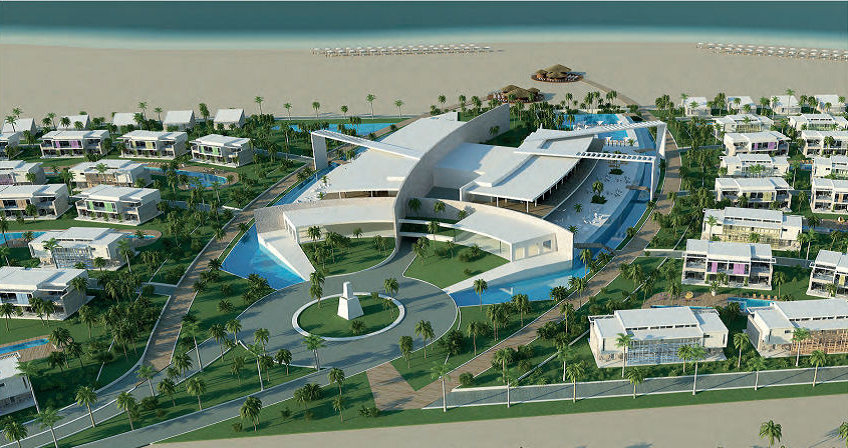 Cape Verde Investments is pleased to announce 4 new hotels in Santa Maria City, on Sal Island, with category between 4 and 5 Stars, which will be completed by the end of this year. The mentioned projects are:

The “Hilton Santa Maria Hotel “, a 5 star hotel with 240 bedrooms and has associated the first Casino of Cape Verde, the Royal Casino. The project is promoted by Batuque Group SA.

The “Royal Decomeron Hotel”, promoted by New Horizon Group, will offer 560 rooms spread over two hotels, 4 and 5 stars, that will have a common support services.

The Llana Beach 5 Star Hotel, with 601 suites, is promoted by The Resort Group, owner of Tortuga Beach Resort and Dunas Beach Resort, both already operating in salt. In the business plan of this group for the coming years also included the Hotel Hilton Beach and the White Sands Resort in Boavista.

Also at an advanced stage of construction is the Aparthotel “Dja d’Sal Houses & Aqua Park”, a partnership between the Halos Group and Turinvest SA. This development consists of 112 apartments and will be part of the Halos Hotel whose construction is due to begin this year.

In addition to these units, it will be in refurbishment and extension the Hotel Dunas de Sal, Hotel Crioula, Hotel Sobrado and the Hotel Riu Funaná. The last of the mentioned hotels will receive the highest category of the group and will be called Hotel “Riu Palace Funaná”.

All these projects represent an investment of 250 million, financed mostly with funds from abroad. With the opening of these new units, Sal Island will feature more 1675 bedrooms and about 3,300 beds. They will be created over 1,600 new direct jobs and about 700 indirect and induced jobs.

These new hotels represent, in a national level, an increasing of 15.8% of the available bedrooms.